You are here: Home1 / About Us

A Little Bit About Us 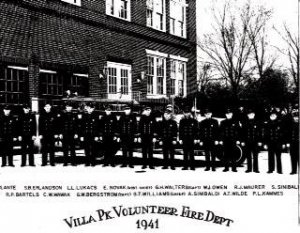 The Villa Park Fire Department was established by the Lions Club in 1925. A group of volunteers trained and answered fire calls under the direction of Frank Link, the first Fire Chief. One of the volunteers owned a gas station at the corner of Monterey Avenue and St. Charles Road. This served as the first fire station. The Village took over the 25-member department in 1927 and purchased one additional pumper from Pirsch Manufacturing in Kenosha, Wisconsin. The fire station was then relocated to the basement of 20 South Ardmore Avenue (which was also the Police Station.) Police personnel would answer the telephone calls reporting a fire, and then activate a siren that would alert the volunteer firemen.

In 1954, the Fire Department was moved into a newly constructed fire station (Station #1) at 28 West Home Avenue. The department membership continued to grow, and more equipment was added. The Village was also growing and as the area north of the Chicago and Northwestern Railroad was being developed, the number of calls increased. This created a need for an additional fire station. Station #2 was built at 102 West Plymouth Avenue in 1967. 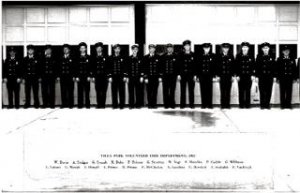 The make-up of the department began to change in 1973 with the hiring of three full-time firefighters. They were assigned to Fire Station #2 at 102 West Plymouth and worked 40 hours a week.

On November 4, 1974, brothers Richard A. Leonard (President), Don R. Johnson (Secretary), Michael J. Tonne (Treasurer) and Robert J. DeVries petitioned the IAFF to grant affiliation. They submitted the fee of $39.52 including; $25 Character fee, $2 per member initiation fee and $1.63 per capita tax, and agreed to charge $4 per month membership dues, the IAFF minimum at the time. On December 13, 1974 the IAFF granted a Charter to the four as Local 2392.

An additional fire station (Station #3) was constructed at 1440 South Ardmore Avenue in 1975 to accommodate the growth taking place on the southside of the Village. The Village created the Paramedic Program in 1976 and hired additional firefighters, who were also trained as paramedics, to work the traditional 24/48-hour shifts. The original brothers who organized were laid off in an effort by management to quell the uprising of any form of a union in the fire department. In January 1977, the IAFF dissolved and involuntarily revoked Local 2392’s Charter due to the lack of membership.

The Village continued to grow like many suburbs and the full-time staff grew to 3 Lieutenants and 12 firefighter/paramedics, they were supplemented by volunteer firefighters and subcontracted paramedics. On July 1, 1993, under intense opposition from management, our members once again affiliated with the IAFF and received a Charter as Local 3528. Lead by Michael Byron (President), Brian Fitzgerald (Secretary) and William Tauchen (Treasurer) 14 of 15 full-time personal joined the Union. In October 1993, the 15thmember joined and the Local petitioned the IAFF to reassign Local 2392 to the organization. In April 1994, the IAFF granted the request. The Union negotiated to eliminate the subcontracted positions to end the constant revolving door of staff and in February 1996, 6 firefighter/paramedics were hired to replace the subcontracted paramedics.

Full-time members staffed Stations 2 and 3 and Station 1 was staffed by Volunteer Firefighters. In 1998, the Village ended the Volunteer Fire Fighter Program and closed Station 1. Station 1 was utilized for training and storage of reserve apparatus. In 2001, the Union and Village agreed to promote 3 additional Lieutenants to supervise crews at both stations.

In 2006, the Village closed Station 1 and turned it over to other Village departments. The same year the Union and Village mutually agreed on a daily minimum staffing of 6 bargaining unit members. While not an ideal nor nationally recognized staffing level this action made daily minimum staffing contractually binding. Many unsuccessful attempts have been made to improve daily staffing. In 2014, the Village agreed to add 1 part-time paramedic per day when available. While this addition has been positive it is not guaranteed, and station brown-outs still occur.

Presently, the Villa Park Fire Department consists of the Fire Chief, the Deputy Fire Chief, the Administrative Assistant, 6 Lieutenant/Paramedics, 18 full-time Firefighter/Paramedics, 1 part-time Paramedic (when available) and 1 part-time fire inspector. Crews respond from Station 81 (Headquarters) on the south-side and Station 82 on the north-side. In 2007, stations and apparatus were renumbered following the county-wide number scheme.

Current members of the union benefit from many years of negotiation initiated by our fore members who sacrificed from personal hardships to provide the working conditions we have today. Local 2392 has 26 member, all 24 full-time personal and 2 retired members and is recognized by the International Association of Firefighters as an affiliate in Good Standing.

Local 2392 has been busy the past few shifts! We are always prepared to respond to many different types of calls, including hazmat incidents! Here we see a few members practicing donning our special Level B and Level A suits!

‘Tis the season of giving! Did you know that Station 81, located just off Roosevelt and Ardmore, is a designated drop off site for Toy Express? Feel free to stop by any time and drop off your donations!

We will never forget.

Today we congratulate Local 2392 Firefighter Jeff Sparger on his retirement. Jeff served the Village of Villa Park for 22 and a half years. Congratulations Brother and enjoy your retirement!